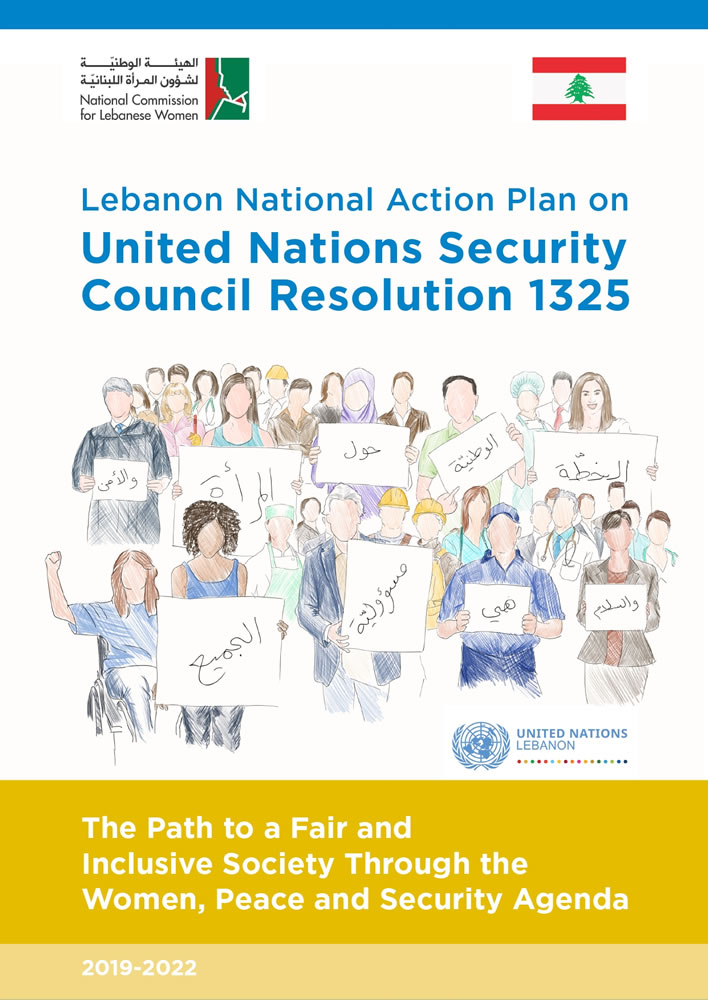 UN Security Council Resolution 1325 adopted in 2000 highlights the role of women in achieving peace and security in their communities and acknowledges their full capacities to participate equally to men in building societies and to lead reform processes necessary for fulfilling all conditions of peace and security.

The resolution is built on around four pillars: the protection of women from violence during and after the conflict, their access to relief and recovery, the role of women in conflict prevention, and their participation in peacebuilding.

This UN resolution with broad support calls upon Member States to take adequate measures for its effective implementation. Lebanon, a country that has tragically suffered from various wars, was among the first Arab countries to express its interest and commitment to implementing this resolution. In 2017, the Presidency of the Council of Ministers requested from the National Commission for Lebanese Women, the government body for women’s issues in Lebanon, to develop a national action plan (NAP) on UNSCR 1325.

Since the implementation of the Resolution requires the involvement of a multiplicity of governmental and non-governmental organizations, the National Commission for Lebanon Women adopted a participatory approach in its mission of developing a 1325 NAP and formed for this purpose a Steering Committee with representatives of ministries and civil society. UN agencies provided the technical assistance and support to the work of this steering committee.

Lebanon’s 1325 national action plan is the result of teamwork between ministries, governmental directorates and all stakeholders, who agreed on the objectives to be reached within four years, allowing Lebanon to play a leading role in effectively implementing UNSCR 1325. This NAP, endorsed by the Government of Lebanon, aims at increasing the participation of women in decision-making processes at all levels, including political, diplomatic, economic and also in the security and defense sectors. Moreover, it will enhance all efforts in preventing and containing armed conflicts and will provide girls and women with more effective protection measures against violence, as well as improve their conditions to access, benefit and participate in relief and recovery efforts.

The implementation of this plan requires close cooperation between all stakeholders in Lebanon and compels a review of legislations and policies to ensure equal rights and opportunities for women and men, by combating gender discrimination and eliminating the imbalance between the opportunities for men and women.

Our objective is to build a balanced society where women and men work together for providing peace and security for the country and suppressing all risks of conflict. This objective will hopefully be achieved thanks to all our concerted efforts: government, institutions, and individuals.
> Download Lebanon NAP (2019-2022)

Office of the United Nations Special Coordinator for Lebanon (UNSCOL)

June 19, 2019 – A roundtable was held today at the Grand Serail, under the patronage of the President of the Council of ministers Saad Hariri, to present the National Action Plan (NAP) on UN Security Council Resolution 1325 on Women, Peace and Security.

The meeting was organized by the National Commission for Lebanese Women (NCLW) and was attended by Ministers Raya el Hassan and Elias Abousaab, the president of NCLW Mrs Claudine Aoun-Roukoz, the UN Special Coordinator for Lebanon Jan Kubis, the UN Resident and Humanitarian Coordinator for Lebanon Philippe Lazzarini, UNIFIL Deputy Head of Mission and Director of Political and Civil Affairs Imran Riza, and a number of representatives of national institutions, the United Nations and the international donor community.
> unscol.unmissions.org/nclw-presents-national-action-plan-resolution-1325-women-peace-and-security

Office of the United Nations Special Coordinator for Lebanon (UNSCOL)

Sep 12, 2019 – The Government of Lebanon has today endorsed, the country’s first National Action Plan (NAP) on UN Security Council Resolution 1325 on Women, Peace and Security, offering a comprehensive national framework for the long term stability and security of Lebanon and a building block for the attainment of the 2030 Sustainable Development Goals. The plan provides a set of tools and resources to drive forward the systematic engagement of women in peace and security deliberations in the country, while enhancing their protection and leadership.
> unscol.unmissions.org/lebanon-government-adopts-national-action-plan-resolution-1325-women-peace-and-security

One of the major breakthroughs that marked the path of the National Commission for Lebanese Women (NCLW) in 2019 was the establishment of a National Action Plan (NAP) for an inclusive implementation of United Nations Security Council Resolution 1325.
Towards the end of 2017, NCLW was entrusted by the Presidency of the Council of Ministers with the task of developing a national action plan to implement United Nations Security Council resolution 1325 on Women, Peace and Security. Determined to adopt a participatory and inclusive approach to fulfilling its new mission, NCLW formed and chaired a 1325 steering committee that included government and civil society representatives, and was tasked with developing an inclusive 1325 NAP addressing Lebanon’s priorities. Furthermore, NCLW held several rounds of consultations with key stakeholders at the local and national levels to develop measurable interventions in accordance with the strategic priorities of the NAP.
> Download PDF

WILPF Lebanon was not involved in the development of Lebanon’s NAP.
The implementation period of the NAP is between 2019-2022.
The subtotal cost for the implementation of the NAP is USD 13,699,640/LBP 20,549,460,000 over four years. The NAP indicates that ten percent of the subtotal has been allocated to a baseline study (3%), yearly monitoring (years 2 and 3 (4%)), and final evaluation (2%), bringing the total cost of the NAP to USD 15,069,616/LBP 22,604,424,000. In addition to including an overall budget, the NAP also has an allocated budget for each strategic priority.
> peacewomen.org/action-plan/national-action-plan-lebanon